This year I had the pleasure of getting to create another film poster for Nanuq Original Film & TV.

Their new documentary, “Snow to Sand”, will be premiering October 28, 2018 at The Academy of Motion Picture Arts and Sciences.

Well, outside of some other projects here and there, I’ve finally finished work on one painting that has been sitting on my art board for quite some time (ok, let’s be honest, 2 years!) This piece is titled “Isolated Chaos”. Originally, through my sketches, my plan was to create a piece using a medium I don’t use all that often, gouache, and to put several different elements in it that tend to be a struggle for me. Stone, building structures, multiple overlapping forms, etc. It began as just a frivolous piece to experiment with and let myself loose on. Not over thinking. 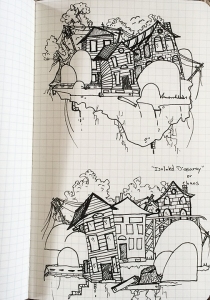 However, as I began sketching, mind-mapping and creating buildings, I realized that certain themes for the buildings kept coming up naturally. Particular buildings held hope, or ideas or even confusion and were in and of themselves, isolated. The elements around them only reflecting those ideas. The isolation of these buildings on a small and delicate mass of earth felt like a reflection of my individuality.

(Sorry for some of the varying picture quality here)

So, by the time my sketch reached the final paper, buildings had attained more depth and clarity as to why they were there and elements began to fall in naturally as I went ahead and gave myself permission to not over think, but just work.

The first building in the foreground represented the present for me. Small and not much to look at, but making the best despite its form and its almost claustrophobic surrounding elements. A brightened exterior and details such as the hanging plant show that despite its surroundings and modest look, it’s doing its best with where it is at and still trying to grow and make itself known, in any way possible.

Yet, the large stones, while in a way create a feeling of security, keep it locked in and don’t even allow the door to be fully accessible. A mailbox in the front lawn, filled with scattered mail that never went anywhere, reminded me of the feeling of miscommunication and not being able to keep up with standard expectations. A railway track runs closely from behind but quickly ends. Showing a hope, though shortsighted and ultimately unable to progress further or to escape.

The next two buildings which are on a similar level, are a skyscraper and a farmhouse. Both to me represented competing desires. One to live in a city and the other the country. The skyscraper is considerably stunted and crowded back. Often as I see the city. With plenty of busyness and modern energy which I enjoy, but with limitations. Yet the largeness of the city and “success” seem alluring. The farmhouse, meanwhile has the comforts of openness and growth. It also communicates a sort of peace and calm to me. The land producing much. Yet isolated and separate. The farmhouse large, yet empty feeling.

And finally, the house on the hill. There’s a lightness, openness and hope in it for me. It’s not overwhelming, yet not suffering from some of the limitations as the others. It’s set for potential. Whether it’s a home, a shop like my mom and I had always talked about or both. It’s the only building with a sign of life, with the smoke rising from the chimney and birds above. There’s natural growth around it and the room for growth structurally. Connected to the others, yet its own identity entirely.

The greenness and natural growth around everything throughout the painting brings a sense of peace and that hope and contentment can be found anywhere. However, things like broken electrical wires, tracks that go nowhere, a leaking pipe and the disproportionate forms showing that things are not all functioning or in their proper place or alignment.

So, I’ll end that there. I’m terrible at ending outside of wanting to awkwardly say, “ta-da!!”

Now I’ll leave the piece up to you. Maybe it says something different to you or nothing at all. Either way, it exists and is finally finished. 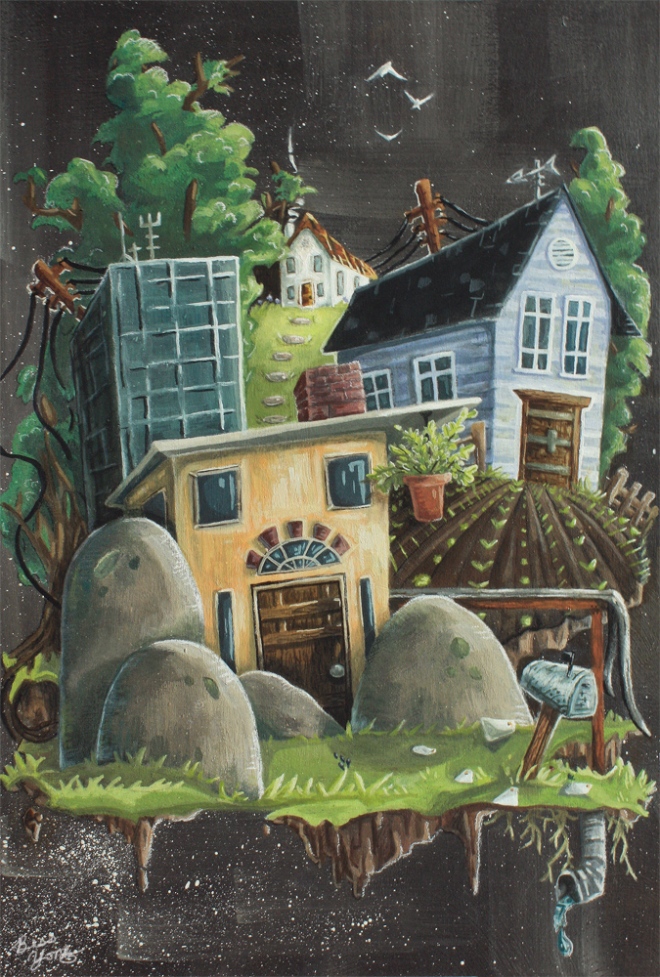 And yes, Sherlock approves this painting. I know you were concerned. He just wanted to let you know. 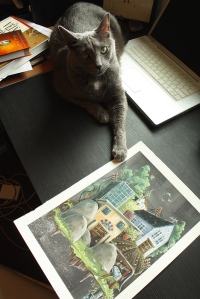 While my mom was in the hospital, my brother, his girlfriend and I stepped out for a bit and went to Barnes and Noble one evening. There, his girlfriend and I picked out journals with the intent that, should my mom be up for it, we could write down some things she wanted us to remember and possibly things for any future grandchildren. It was incredibly tough to ask her and for her to think about at that tough time.

We were never really able to use those journals in the hospital. There was never a slow moment and everything with her cancer went so fast and we lost her so quickly, that my journal sat empty. However, I knew that when I felt up for it, I would write as many things as I could so I’d have them to remember and pass on. I wanted to write and remember funny moments, words of wisdom, what she planted in her garden, her hopes and things she enjoyed about life. I decided that I’d combine it with drawings here and there of things she used to enjoy.

So, I began that project this weekend. On one page I did this little watercolor sketch of a rough-cut piece of Celestite. I chose this for two reasons. One was selfish. Illustrating rocks and stones has always been a weak point for me, so I wanted to get practicing on that. But, more importantly, my mom and I bought this mineral piece together at a rock and mineral show a couple years ago. 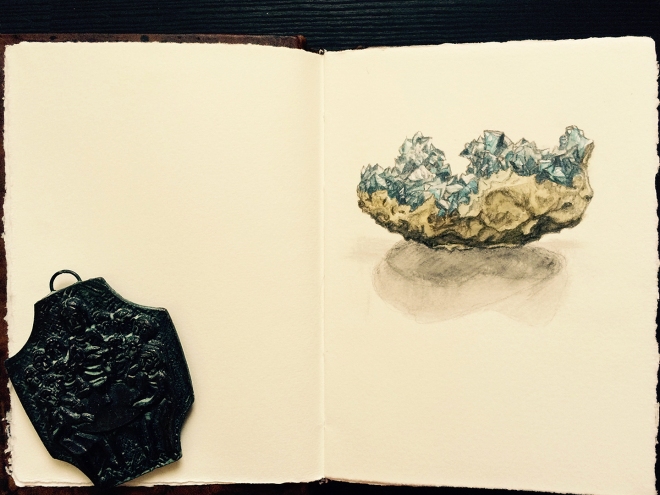 My mom always enjoyed geology and the study of rocks and minerals. I remember memorizing a chart of rocks and minerals back when I was about 5 years old that she had created in college. It was one of our favorite things to do together. Whenever we went somewhere in nature, she and I constantly looked for unique stones, fossils, anything that caught our eye.

Later, she and I began going to rock and mineral shows. (Geeky, I know, but actually very interesting and fun). There’s surprisingly quite a few of them. She and I were both fascinated by the variety of rocks and minerals and what part of the world they came from. My mom was also just as interested in the people who collected, hunted for and sold them. She loved listening to them and their stories.

She and I would pick out several favorites at the shows, (reasonable priced little pieces of course) and sprinkle them around our home decor. Certain colors and shapes relaxed us and we both always loved having natural elements around the home.

So, this little sketch now graces one of the journal pages and I hope to add more of the treasures we collected from the rock and mineral shows throughout the journal.

Well, I’ve dropped off of here for a while, but I’m determined to get this blog going again. I’m going to start with a pretty personal post. This year has been filled with some of the happiest moments of my life and some of the saddest. The reason for my lack of posting/creating new work can best be explained by this little outline of the past six months:

So, it’s been a bit of an overwhelming time for me and my family. It’s made us ask a lot of tough questions and take a hard look at reality, (as I’m sure is common for everyone who witnesses a death). We’ve also celebrated the life of my mom because, well, she was pretty awesome. She encouraged everyone, always turned a situation into an adventure, loved well and was loved by many in return.

My family and I know we will see her again soon. To be honest, (and not to be dark or that I’d rush this along in any way), it’s the waiting for that time to be together again that is the worst. The realization and thoughts of how to use that waiting time is also now on my mind every day. Again, this is something I’m sure everyone who sees death come to someone firsthand experiences — along with the common realization that life is short and often even shorter than we think. We are so often in a comfort bubble of mundane routine that we forget what’s really going on until a death, shooting or terrorist attack pops our bubble.

Anyway, not to be abrupt, but I’m really terrible at spilling out and communicating my emotions verbally. Those of you who know me know that it’s a challenge. This is about all I can handle for right now. But for those who will listen, I just wanted to share where I am at.

In terms of my illustration work, frankly I’ve hit a point of little feeling to continue. But, I’ve recently attended a great event through a friend’s church and heard from a few artists there that have spurned me on a bit more to keep going. Also, I know that my mom would want me to continue. Even if it leads no where, it helps me and I know she always enjoyed my work and writing stories based off my pieces.

So, I’m going to close this out with one small little painting I did one day while my mom was in the hospital. As for my artwork, I’m going to keep moving forward.

Check out this blog post from my brother, Brent Yontz, about my mom and his climb up Mt. Whitney shortly after her diagnosis —> www.thehumantracks.com

The Earth Giants are one of my favorites and I’m currently enjoying doing some more sketches and starting a new piece featuring them. Have you read about the Earth Giants? Read their bio here by clicking this link ——-> http://www.bessyontz.com/#!the-earth-giants/c1ox2

Sorry, I disappeared for a while. July – September have been crazy with work and I got engaged the end of July, so wedding planning has commenced! Anyways, I recently updated my website. So please feel free to check it out. There’s a bit of a new layout, some new imagery and I will be adding a few new illustrations soon as well.
http://www.bessyontz.com/ 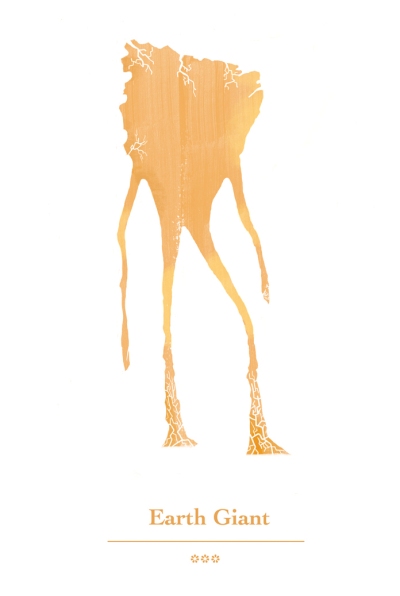 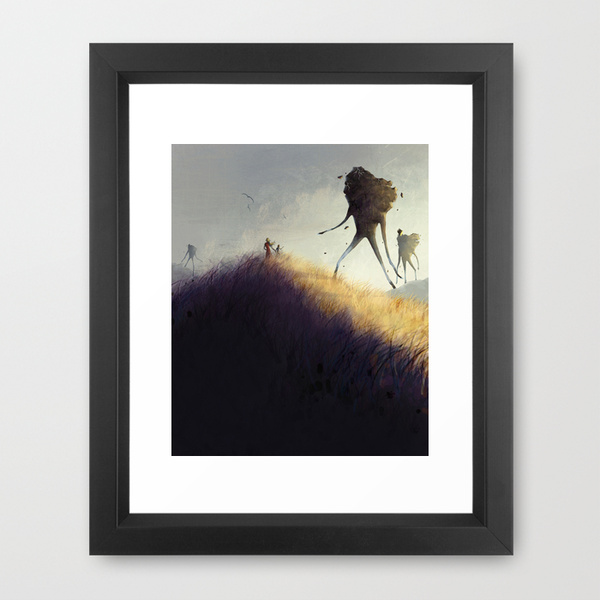 This is the final of my most recent personal piece, “What Remains”. 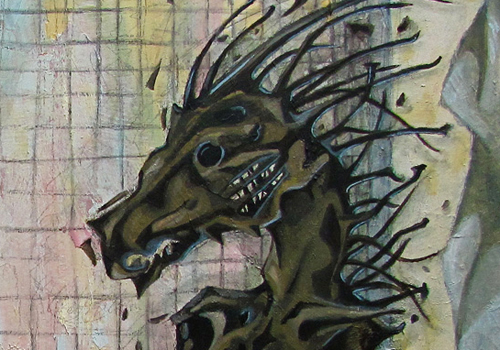 Here’s a sneak peek at my most recent personal piece I am working on, “What’s Left Behind”. 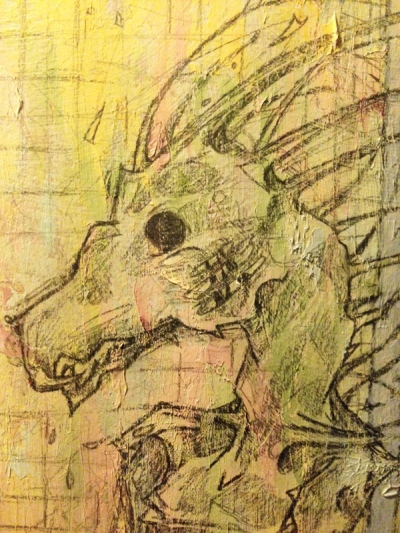